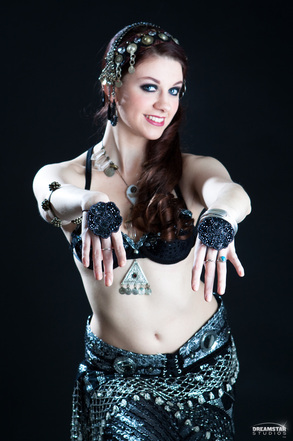 Incorporating her family's love of Balkan folkloric dance with her extensive ballet and contemporary dance training, Jenna Shear has developed a bellydance style that is truly her own.  Her work ranges from pure folkloric dance to cutting edge fusion and is carefully tailored to each event.  A performance with Jenna is guaranteed to delight audiences of all kinds thanks to her careful attention to detail, technique, and feeling.

Born and raised in a family of Balkan music and folk dance fanatics, Jenna has been moving to groovy Slavic tunes from the womb.  She began her formal dance training at age three and studied ballet and Russian character dance extensively under Eugene Petrov and the late Irine Fokine.  While earning her Bachelor of Arts in Dance and Asian & Middle Eastern Cultures at Barnard College, Jenna discovered bellydance and joined the Columbia University Bellydance troupe in Fall of 2009.  She quickly became the troupe's Vice-President and a leading choreographer.

Since graduating, Jenna has worked with prestigious groups, such as Bellydance Evolution, Wild Saffron, BellyTrance, and the Nomad Dancers. She has also taught and performed at numerous national events, including 3rd Coast Tribal Festival, Jewels of the Orient, Waking Persephone, and Art of the Belly. In 2014, she joined the faculty at Saffron Dance. In that same year, she founded her own Balkan Fusion troupe Jenna Shear & the Slivovica Sizzlers. It's become Jenna's personal mission to offer an alternative vision for "Balkan Fusion" within the bellydance community, one that is rooted in the actual folk movements, region-specific stylizations, and cultural markers of the various communities and nations within the Balkans. To that end, she offers workshops on Balkan folk dance and her brand of Balkan Fusion produces choreographic suites that entertain and educate by physicalizing the spectrum from pure folk dance to pure bellydance while highlighting the movement commonalities between them as the most fruitful grounds for thoughtful fusion.